We'll get back in touch within 24 hours.

Recently I had the opportunity to hear Jason Fried, cofounder of Basecamp (formerly 37signals), speak at Inc.’s GrowCo event in Nashville.

I don’t think it was Fried’s original intent (he’s on the record as saying he doesn’t want to sell out), but focusing on one product is going to make his company a whole lot more attractive to a strategic acquirer one day. Just like when you buy a cable TV package and you’re asked to buy 200 channels you’ll never watch,  the more useless stuff a strategic acquirer is asked to buy, the less attractive the entire bundle becomes.

Most authors are lucky to have one book hit the New York Times bestseller list.  Actors can wait a life time for a single Academy Award nomination. And most business owners will be extremely lucky to create one truly winning product.

A strategic buys what they cannot replicate

In a strategic acquisition, a buyer is purchasing what they cannot easily replicate. They are looking for the jewel in the crown but place little value on a product they could easily trump or a department they will jettison after the sale.

And that’s where the breakdown occurs.

Owners typically want to be paid for their entire business, but strategic acquirers often only want the winning product. An owner with a sprawling business generating $50 million in sales will rightly want to get paid on a multiple of their company earnings. A private equity buyer, who buys businesses as investments and not to run them,  may well pay six or seven times earnings for a diversified mid-market company with a consistent track record of squeezing out a profit from selling a bunch of okay products.

A strategic acquirer, on the other hand, will look at the same business and strip away the average products before making an offer based on what the best product(s) is worth in their hands. If the winning product is a small part of a diversified company’s revenue, the owner may be disappointed by how low the offer is from a strategic acquirer (traditionally the type of acquirer that pays the most for a business).

In Fried’s case, project management software Basecamp is a category winner with 15 million account holders and a legion of raving fans who see its simplicity as a key differentiator against bloated programs like Microsoft Project. If Fried ever wanted to sell his company, you can see how a business like Salesforce.com or Google would jump to buy Basecamp.

But Salesforce.com may not be quite as keen to pay a premium multiple for Highrise, one of Basecamp’s less successful programs. A quick look at the reviews on the iTunes’s App store shows customers are less enthusiastic about Highrise than they are about Basecamp: 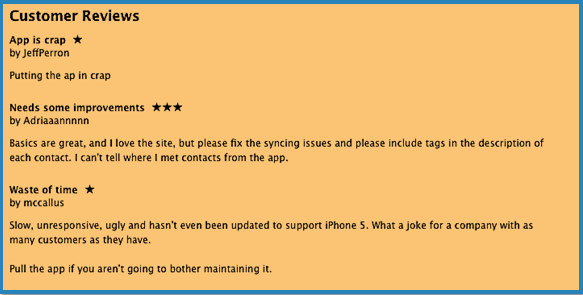 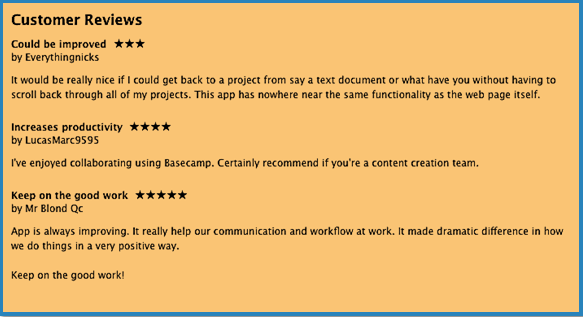 Salesforce.com already has an industry-leading contact management application, so if they had acquired Fried’s Basecamp prior to his decision to consolidate products, they would likely have folded the Highrise product into Salesforce.com or gotten rid of it altogether.

I’m probably being unfair to Highrise and maybe I sound like I don’t think what Fried has built is amazing. In fact, I’ve had the chance to meet and speak with Fried on a couple of occasions and I have huge respect for what he and his team have accomplished at Basecamp. It just happens to be a timely example of an age old phenomenon: strategic buyers pay a premium for what they cannot easily replicate and the more “other stuff” you do or sell, the less attractive your business is to a strategic acquirer.

That’s not to say Highrise and Campfire won’t be sold. In fact, Forbes is reporting that they are being actively shopped and may fetch a tidy sum. But my guess is that the bundle wouldn’t sell for the premium multiple that someone would pay for Basecamp if Fried sells it as a focused business with one killer product.

There are examples of companies that have built multiple successful products (Dyson comes to mind), but Basecamp is a relatively small business with just 43 employees and Fried has chosen not to go the V.C. route.   They have limited resources when compared to their billion-dollar rivals and have made the wise and courageous decision to double down on a single winner.

Why stick with products that strategic acquirers view as liabilities?

If you’re not going to get paid for parts of your business that are just okay, why bother sticking with them? Aren’t they just noise adding little value to your company? Why not, as Fried has done, focus your energy on the one product where you already have a winner. Invest your resources in staying ahead of competitors rather than spreading yourself too thin. If you get busy playing catch-up with me-too products, an acquirer may view them as a liability rather than an asset.

Sign up for email updates of new blog posts